MASTER
Home
About
Get There
Tickets

ABOUT ABOUT
Antonio Brown announced on January 7, 2010 that he would forgo his senior season and enter the 2010 NFL Draft.He was selected by the Steelers 195th overall in the 6th round.

On September 19 against the Tennessee Titans, Brown made his regular season debut and had 128 yards on 3 returns (2 kickoffs, 1 punt), including an 89 yard touchdown from a reverse on the first play of the game. In the AFC Divisional Playoffs against the Baltimore Ravens, Brown caught a 58 yard pass on 3rd & 19 from quarterback Ben Roethlisberger to set up the game-winning touchdown. The following week in the AFC Championship against the New York Jets, at the two-minute warning, Brown caught a 14 yard pass on 3rd & 6, sealing the victory for Pittsburgh as they advanced to Super Bowl XLV. 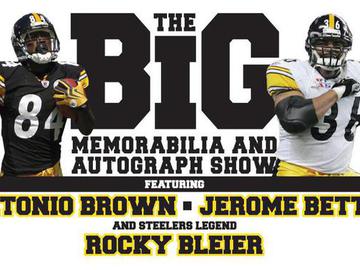 * Ticket will be required on event day to obtain autograph. All tickets will be scanned at the Big 33 Information Table on the day of the event for authenticity. Duplicates will not be accepted.
* The ‘Terrible Towel Pass’ can only be honored with a purchase of an autograph ticket.
* 8 x 10 flats, Mini helmets, 16 x 20 photos, Footballs, Full Size Helmets, and Jerseys are not included in Autograph ticket purchase.
* "Merchandise Only" items do not include autograph or autograph ticket. If you require an autograph on the item, purchasing an autograph ticket will be required.
* All Antonio Brown Autographs include a JSA Witness Protection Certification sticker.
* Antonio Brown will not sign game used items or original artwork.
* Antonio Brown has the right to refuse to sign any item that he is not comfortable signing.
* No posed photos will be permitted. Fans will be allowed to take pictures of Antonio Brown while items are being signed but Mr. Brown will not take time to pose for individual photos with fans.
* If Antonio Brown cancels this appearance due to emergency a rescheduling date will apply.
* Big 33 reserves the right to reschedule the event if there is an "Act of God" or weather event that would prohibit reasonable travel to and from the event.
* All sales are final.
* No refund will be given after the start of the event.

other events by this organization